VFSTR has introduced a four-year B.Tech. - Robotics and Automation Engineering a multi - disciplinary program from the academic year2020-21. Robotics and Automation Engineering is one of the emerging multi - disciplinary areas transforming conventional practices in industry to digitalization which plays a crucial role in the Prime Minister's Call 'MAKE IN INDIA', 'DIGITAL INDIA' and INDUSTRY 4.0.

Current status of Robotics in India
In India, robotics has already reached an advanced stage where crucial sectors, such as healthcare, are utilizing the technology to enhance their offerings. Robotic medical assistants are being used to constantly monitor and interpret the vital stats of patients. These revolutionary medical assistants are also capable of analyzing patient symptoms and designing a course of treatment. From dispensing drugs to conducting screening tests, robots can now share a lot of responsibilities with humans.

Robots are also replacing humans in warehouses where jobs are intensive and potentially dangerous. From heavy lifting to inventory collection, robots are capable of taking care of all warehousing tasks. In fact, thanks to the massive potential of robotics in warehousing, the Indian market for warehouse automation is projected to grow at a CAGR of 10-12% during 2015-2020, and is expected to reach $3.49 billion by 2020. The rapid transformation and advancement in the robotics sector in India comes as a refreshing development in the technological landscape. The perfect amalgam of AI, Machine Learning and IoT, robotics will undeniably take on scores of jobs currently being tackled by humans.As far as the future of robotics in India is concerned, the picture looks bright and replete with potential. Tremendous research is going into the sector, with technologists working towards inventions such as robotic pets, robotic security guards and robotic palliative caretakers. Interestingly, certain AI and machine-learning algorithms are even being taught to write poetry, create paintings and even dream.

Current status of Industry 4.0 in India
Globally, the I4.0 market is expected to reach INR 13,90,647 croreby 2023. Countries such as the U.S., China, and Japan andEuropean nations such as the U.K., Ireland, Sweden and Austriahave all started adopting I4.0.In India, the sixth-largest manufacturing country, the manufacturingsector forms an integral part of the country's long-term vision asseen by the government's strong focus on the 'Make in India'campaign. The government aims to augment the share ofmanufacturing in GDP to 25 per cent from the current 17 per cent,by 2022. A number of initiatives and policy reforms, such asimplementation of the GST (Goods and Services Tax) and easingFDI policy, has been taken by the government.

Career Opportunities:
B. Tech in Robotics and Automation Engineering make the students for the job roles:

Copyright © Vignan's Foundation for Science, Technology and Research (Deemed to be University) 2016. All rights reserved.

Created by: IT Services 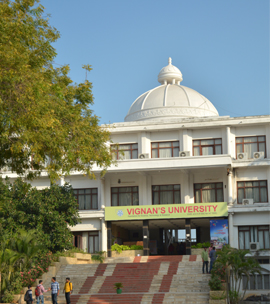